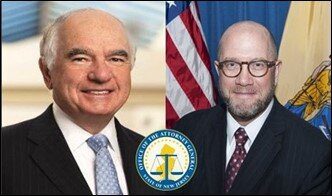 A Conversation with Attorneys General John Degnan and Chris Porrino

Hon. John J. Degnan served as the Attorney General of New Jersey under Gov. Brendan Byrne from 1977 to 1981. Prior to his appointment as the youngest Attorney General in state history, he served as the Governor’s executive secretary and counsel. He later spent 20 years at Chubb, serving as vice chairman and chief operating officer from 2008 to 2010, and was appointed by Gov. Chris Christie as Chairman of the Board of Commissioners of the Port Authority of New York and New Jersey. He later served as President and CEO of the American Insurance Association. A graduate of Saint Vincent College, Attorney General Degnan earned a juris doctorate degree from Harvard Law School.

Hon. Christopher S. Porrino served as Attorney General of New Jersey from 2016 to 2018. Prior to his service as Attorney General, he held a variety of positions at the State of New Jersey, including Chief Counsel to Gov. Chris Christie from 2014 to 2015 and Director of the Division of Law from 2012 to 2014. He currently serves as partner of Lowenstein Sandler, and chair of the firm’s Litigation Department. Attorney General Porrino graduated from Lehigh University and received his juris doctorate degree from Seton Hall University School of Law.