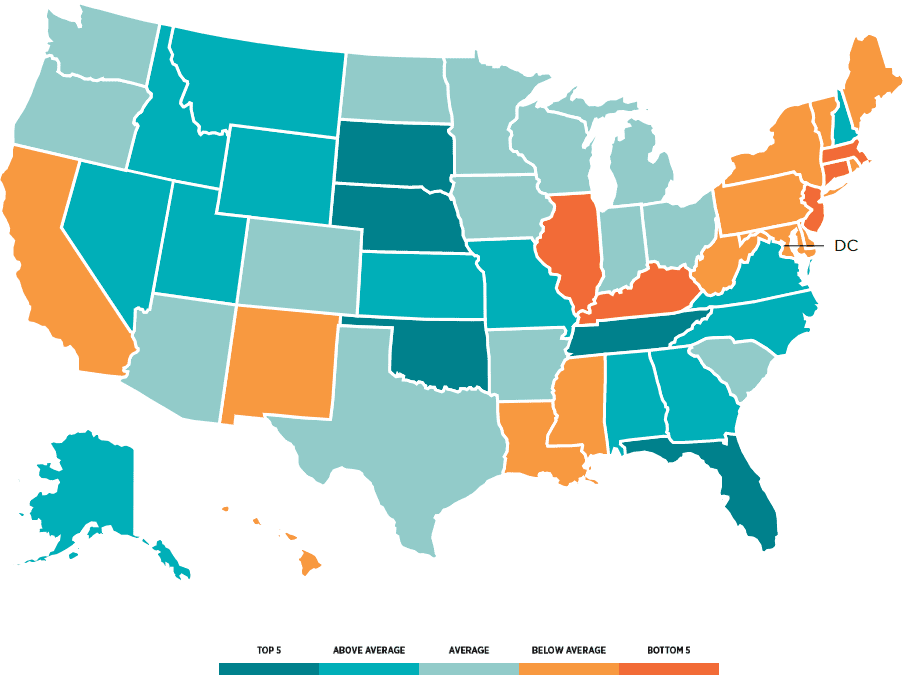 “Hey, at least we’re not last” is all the solace New Jersey residents can take from the 2018 State Fiscal Rankings for fiscal health from the non-partisan Mercatus Center at George Mason University. This result marked a small improvement from the state’s 2017 ranking, when it ranked at the bottom, 50th out of 50. New Jersey landed in the study’s bottom five, along with Kentucky, 46, Massachusetts, 47, Connecticut, 49, and Illinois, 50.

The study, which compares states over 10 years, from fiscal year 2006 to 2016, provides a snapshot of each state’s fiscal health by providing information from audited state financial reports. The study measures how well states can meet short-term and long-term bills by examining their financial statements.

According to the Mercatus Center research, “…on the basis of its solvency in five separate categories, New Jersey ranks 48th among the US states for fiscal health. New Jersey has between 0.93 and 2.44 times the cash needed to cover short-term obligations. Revenues only cover 89 percent of expenses, with a worsening net position of –$798 per capita. In the long run, New Jersey’s negative net asset ratio of 2.98 points to the use of debt and large unfunded obligations. Long-term liabilities are higher than the national average, at 388 percent of total assets, or $18,928 per capita. Total unfunded pension liabilities that are guaranteed to be paid are $272.54 billion, or 49 percent of state personal income. OPEB are $85.42 billion, or 15 percent of state personal income.”

The news comes on the heels of yet another bottom-rung ranking for the Garden State; according to the 2019 edition of their annual analysis, New Jersey once again ranked dead last of the fifty states in the non-partisan Tax Foundation’s State Business Tax Climate Index.