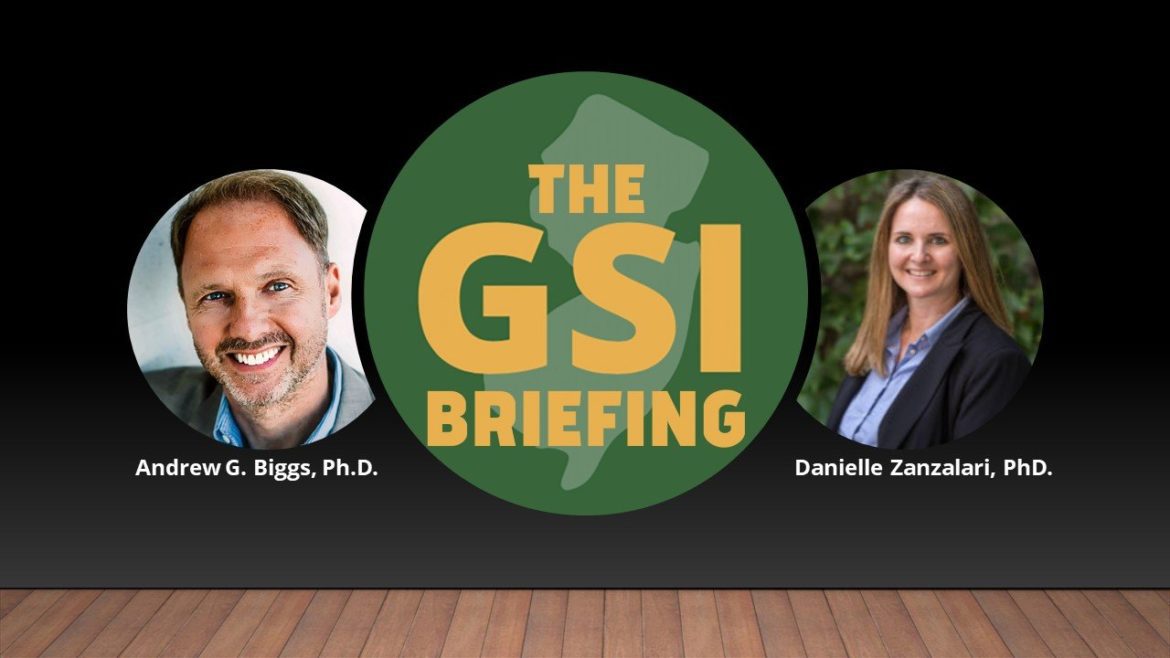 In this episode of The GSI Briefing , Regina Egea is joined by Andrew Biggs, Ph.D. of the American Enterprise Institute and Danielle Zanzalari, Ph.D., a Professor of Economics at Seton Hall University.

The Garden State Initiative has issued a new report, authored by Dr. Biggs, based on recently released data on our New Jersey’s unique and troubled pension system. The report showcases how the aging demographics in our state’s Public Pension system, retirees versus payroll workers, is negatively affecting not only the pension system but our state’s economy as a whole.

In addition, the report lays out in rather simple terms how the value of a public pension is actually four times higher than a typical retirement account a NJ resident receives. Several recommendations are provided in the report to achieve a better balance of the risk and opportunity between all our public employees and their employer, that is our government.

It’s a subject that has been a hot topic in our state for some time but with this report we look to unpack and explain specifically how these public pension systems actually are affecting our everyday lives.

Andrew G. Biggs, Ph.D. is a senior fellow at the American Enterprise Institute (AEI), where he studies Social Security reform, state and local government pensions, and public sector pay and benefits. Before joining AEI, Biggs was the principal deputy commissioner of the Social Security Administration (SSA), where he oversaw SSA’s policy research efforts. In 2005, as an associate director of the White House National Economic Council, he worked on Social Security reform. In 2001, he joined the staff of the President’s Commission to Strengthen Social Security. Biggs has been interviewed on radio and television as an expert on retirement issues and on public vs. private sector compensation. He has published widely in academic publications as well as in daily newspapers such as The New York Times, The Wall Street Journal, and The Washington Post. He has also testified before Congress on numerous occasions. In 2013, the Society of Actuaries appointed Biggs co-vice chair of a blue ribbon panel tasked with analyzing the causes of underfunding in public pension plans and how governments can securely fund plans in the future. In 2014, Institutional Investor Magazine named him one of the 40 most influential people in the retirement world. In 2016, he was appointed by President Obama to be a member of the financial control board overseeing reforms to Puerto Rico’s budget and the restructuring of the island’s debts. Biggs holds a bachelor’s degree from Queen’s University Belfast in Northern Ireland, master’s degrees from Cambridge University and the University of London, and a PhD from the London School of Economics.

Danielle’s career has included working with other workstreams and consultants to streamline the process and increase efficiency and accuracy. At the Fed, she evaluated stress-testing models at all of the major banks in the PPNR workstream, and Danielle has been research projects on deposit demand estimation, off-balance sheet items, and the CRA Act. In addition, she consults for banking organizations and hedge funds on various economic and banking topics, and writes on personal finance for The Balance.

Welcome to the GSI Briefing podcast – hosted by Regina Egea, President of the Garden State Initiative. This episode features Dan Clifton’s presentation from…

Podcast: Veterans Are Being Left Out in New Jersey

Welcome to the GSI Briefing podcast – hosted by Regina Egea, President of the Garden State Initiative. This episode features Regina’s conversation with Col.…

Welcome to the GSI Briefing podcast – hosted by Regina Egea, President of the Garden State Initiative. This episode features two leading voices on…