·  Short-term gains are positive news for the state, but New Jersey still not fully recovered from economic losses of recent years.

On Thursday, the New Jersey Department of Labor and Workforce Development released the monthly economic surveys for the state. The two separate surveys showed that New Jersey employers added 1,900 private sector jobs to their payrolls and the state’s workforce grew by 2,500 individuals over the month.

“The September reports were generally positive news in the short term,” said Garden State Initiative President Regina M. Egea. “Over the longer term however, while New Jersey is starting to slowly grow its economy, the Garden State still lags behind where the state was a year or even three years ago.”

The state’s workforce grew by 2,500 individuals in September and the state unemployment rate held steady at 4.2 percent.

The workforce is comprised of people who are actively employed, and people who are unemployed but actively looking for work. The state’s workforce levels and unemployment rate come from the “household survey” which is conducted by the U.S. Census Bureau who contacts a sample of New Jersey residents to record their employment status.

While New Jersey’s workforce grew in September, it is still smaller by 30,100 individuals compared to September last year. The state’s current workforce is also smaller than the state’s average workforce size in 2008.

Monthly job growth and growth over the year

New Jersey private sector employers added 1,900 jobs to their payrolls in September. The sectors with the biggest gains were Information (+1,200 jobs), Professional and Business Services (+2,800 jobs) and Leisure and Hospitality (+900 jobs). The sectors that suffered the biggest losses were Construction (-1,500 jobs), Education and Health Services (-2,100 jobs) and Manufacturing (-200 jobs).

Compared to September 2017, the Construction sector has suffered the biggest losses with 9,600 fewer jobs over the year. Professional and Business Services, Education and Health Services, and Leisure and Hospitality have all seen the biggest spikes in sector jobs with gains of 16,500 jobs, 16,100 jobs and 10,100 jobs respectively.

Jobs numbers are derived from the “establishment survey” which is conducted by the U.S. Department of Labor who gathers data from approximately 4,000 businesses for estimates of their job numbers.

Unlike the state’s workforce numbers which have suffered long streaks of losses, New Jersey employers have added jobs at a relatively steadier pace since the low point of the last recession in 2010.

Gov. Phil Murphy recently released his economic plans for the state to try and bolster job growth and encourage business investment in the state. Garden State Initiative analysis of Gov. Murphy’s plan has shown how, if improved and carried out responsibly, these plans could begin to help improve and expand the state economy.

The latest economic reports for New Jersey show the state adding jobs, especially the service industry sector, and the state’s workforce slowly growing and trying to recover from the consistent losses it’s suffered over recent years.

While recent gains are undeniably a positive, unless they become more substantial in the coming months it could take the Garden State economy months—if not years—to fully recover from the losses inflicted by years of high taxes, uncompetitive policies and short-sighted budgets. 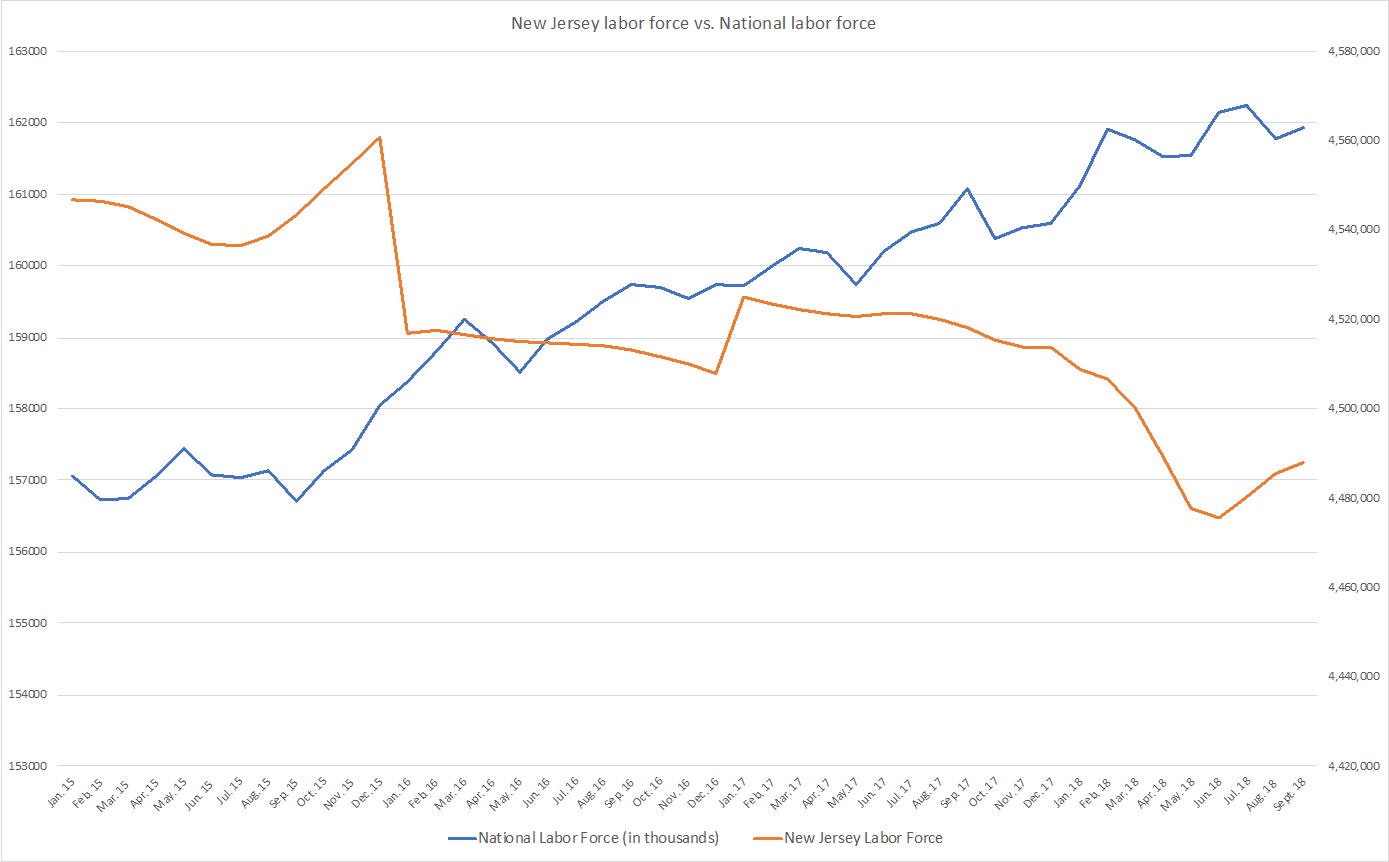