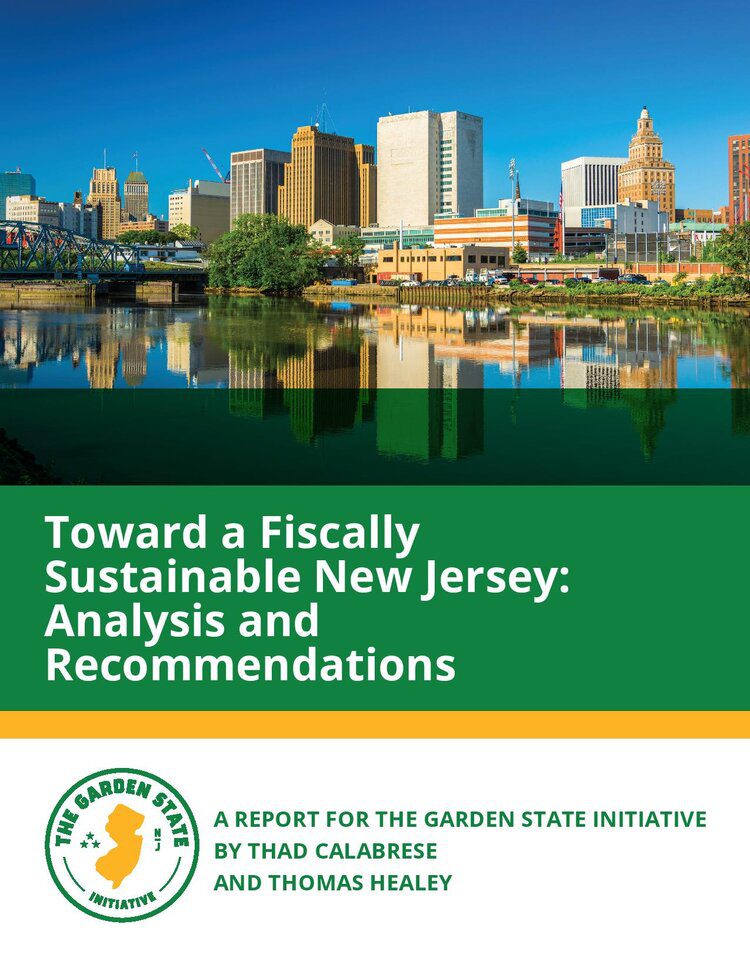 In a new research report, Toward a Fiscally Sustainable New Jersey: Analysis & Recommendations, the Garden State Initiative examines the lack of progress that has been made in addressing New Jersey’s long-term fiscal crisis outlined in the 2012 State Budget Crisis Task Force analysis by Paul Volcker and Richard Ravitch. The authors of the new report, Thomas J. Healey and Thad Calabrese, Ph.D., write how to change that state’s fiscal course post-pandemic by implementing the kind of bold reforms and measures that can ensure a strong and fiscally sustainable economic future for its citizens and businesses.

“Having sat in the Governor’s chair I know the difficulties of managing the competing interests when formulating a budget,” said Gov. Thomas H. Kean, who served as New Jersey’s 48th chief executive.  “The reality is that the problems detailed in this report are significant and can no longer be ignored. While I commend Gov. Murphy for making the full pension payment this year, the reality is that there is no solution in sight for a year when we do not have federal financial assistance. It is now time to act for the sake of our state’s future.”

“In the last decade, the fiscal challenges faced by our state have not been addressed in any meaningful fashion, in fact, we’ve backslid in several measurable ways,” noted Mr. Healey, the founder and managing partner of Healey Development LLC and Senior Fellow at Harvard University’s John F. Kennedy School of Government. “Our report offers several specific policy recommendations that can reverse this trajectory if our elected officials have the courage to make decisions that reflect the long-term interests of New Jersey. We now need voters to hold those officials to account.”

“Despite the praise surrounding the significant $6.9 billion investment in the pension fund, the state must avoid being lulled into complacency because of one-time Federal COVID financial relief and its $4 billion in borrowing,” added Dr. Calabrese, an Associate Professor of Public and Nonprofit Financial Management at the Robert F. Wagner Graduate School of Public Service at New York University. “New Jersey’s continued success is far from given as our study shows.  It is vital that the next state budget does more to help limit the damage and allow for strong economic growth.”

Entering a global pandemic and recession, in 2020 New Jersey’s fiscal condition and economic future were already on an unsustainable trajectory that has since only been exacerbated. Among the key indicators of the state’s decline identified in the report are:

While the overall national economy grew significantly during the past decade, New Jersey did not benefit from this national growth. As noted above, the state’s population and workforce remained flat, a signal that the state was not competitive in attracting people or businesses. During this time, the state budget grew while the population was relatively flat. New Jersey was essentially drawing more resources from its tax base which hindered its business competitiveness. This stagnation has left the state with the urgent need—and promising opportunity—to change its fiscal course post-pandemic by implementing the kind of bold reforms and measures that can ensure a strong and fiscally sustainable economic future for its citizens and businesses. The state needs to avoid being lulled into complacency because of more than $6 billion of one-time Federal COVID financial relief and its $4 billion repayable borrowing.

The report argues in detail that the following critical steps must be taken to place the state on a sustainable fiscal trajectory: