New Jersey’s Energy Future: At What Cost to You? - Garden State Initiative 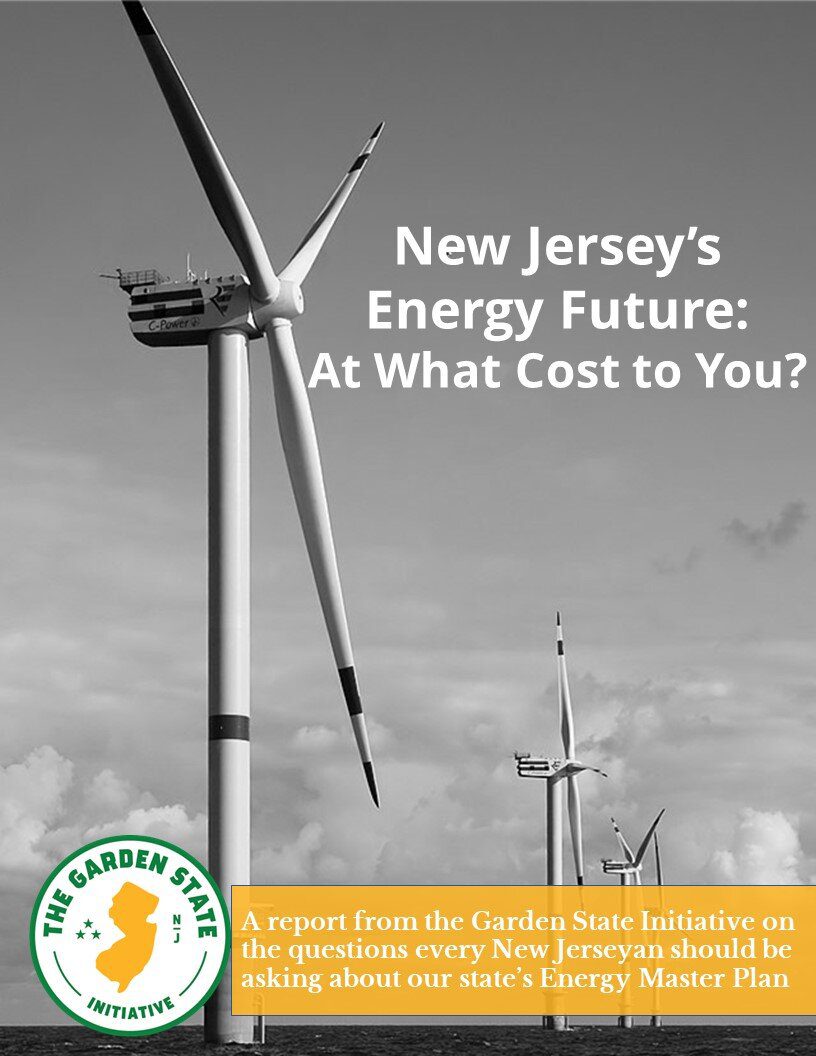 Report Examines NJ’s Energy Master Plan, the Unanswered Questions on Impact to Residents, and Calls for Pause Until Cost Analysis is Completed

In a new research report  New Jersey’s Energy Future: At What Cost to You? issued today, the Garden State Initiative offers an independent review of New Jersey’s Energy Master Plan (EMP). Since the EMP was released in January 2020, the details of the plan have largely eluded public scrutiny as portions have moved towards implementation.  The report, which continues GSI’s commitment to independent analysis of how government can most effectively serve the public, provides an overview of what is, and more importantly, what is not in the plan, and recommends area residents demand more information from the Murphy Administration and the state’s Board of Public Utilities.

“The EMP provides a vision of the Administration’s goal to transition our state to renewable energy which most New Jerseyans support. But visions and strategic plans without providing any underlying costs are rightfully met with broad skepticism and suspicion,” stated GSI’s president Regina M. Egea. “The Administration only recently initiated a cost analysis that will not be complete for 18 months, yet implementation of the EMP, including contractual commitments for billions of ratepayer’s dollars, continues. Residents and businesses deserve to know the EMP’s expected price tag and how it will impact their everyday lives. For that reason, any action on the plan’s major elements must be delayed until, at the very least, the cost analysis is finished at the end of 2022. The stakes are simply too high for all of us to do otherwise.”

Contrary to industry trends, New Jersey’s residential electricity rates climbed 4.6% last year – the largest rise among nearby states.  Policymakers and lawmakers are doing a disservice to their constituents when they ignore the question of cost when setting energy policy. We cannot accept incomplete plans with aggressive policy objectives that inadequately consider the economic impact on households, especially on our middle class, lower-income and retired residents.

Among the issues explored in the report are:

The timing and cost to each of our residents who will be required to switch their homes to all electric from gas heat (in addition to the expected hefty rise in their electricity bill). The EMP puts the cost to switch at $7,500 but in Massachusetts, the actual cost to convert to electric heat pumps cost roughly $23,000 – not including the purchase of a new electric stove, grill or clothes dryer.

The EMP’s impact on economic growth, revenue and jobs. Besides several glossy predictions, specifics remain a mystery. While the state likely will benefit from the flow of federal funds for wind energy projects off its coast, many of the anticipated new jobs will require job training. Previous substantial job-training funds have yet to generate many new jobs at new facilities like the Paulsboro Marine Terminal.

The effects on key sectors of the state’s economy – especially tourism, fishing, transportation and construction. The thoroughness of the examination of wind farms’ 850-foot-tall turbines visible from the Jersey coast is already being questioned by the tourist trade organizations – our state’s second biggest industry. The commercial fishing industry, our fifth-largest industry, recognizes that a variety of environmental impacts associated with offshore and onshore wind power must be addressed and mitigated. Specifics are absent. The EMP plan to electrify the transportation sector, including transportation systems to reduce greenhouse gas emissions, skirts how it can meet the specific goals of substituting electric vehicles for gas-powered vehicles and supplying enough electric charging stations by 2050. And housing and commercial contractors are now asking questions about a plan to require environmental impacts of new projects.

How much of a real difference the EMP can make on climate change. Recognizing that New Jersey does not exist in a controlled bubble, our pace of investing needs to be balanced with the recognition of counterproductive actions of our neighbors and global competitors. One energy consultant estimates the EMP’s benefit will equal three-to-four days of the pollution that China produces.

“In moving ahead with the EMP, the Administration and lawmakers must strike a balance between moving to an inexorable reliance on renewables for sustainability’s sake, and the economic burdens that New Jerseyans already bear, stated Ms. Egea. “So much of this remains unanswered. These are the vital questions of residents and business owners alike that, until answered, should preclude any action on the EMP’s major elements until – at the least – the essential cost analysis is finished and publicly communicated fully so residents and businesses can respond.”