Retirees and New Jersey: How we can be Perfect Together - Garden State Initiative 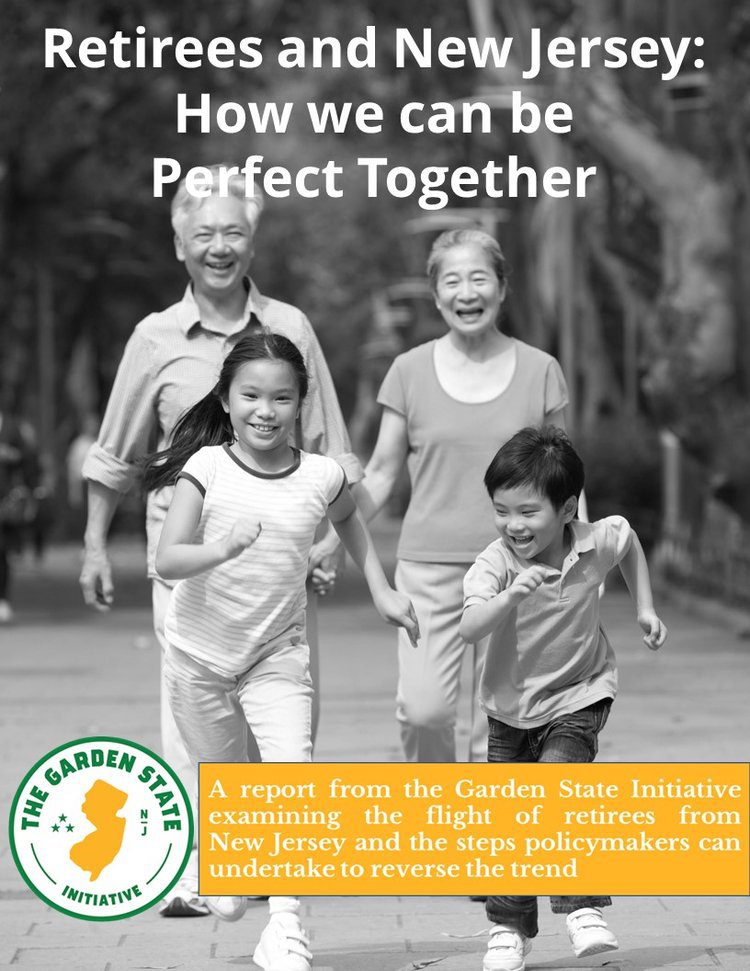 As many New Jersey families gather around the Thanksgiving table this week, some grandparents will be travelling from their retirement in other states to see their families. For others, a topic of discussion will be their plans to retire in a destination other than the Garden State.

The facts about retiree outmigration are indisputable. In a new research report, Retirees and New Jersey: How we can be Perfect Together, the Garden State Initiative offers an independent analysis of multiple data sources to identify what issues are driving retirees from our state and offers policy solutions that can help to reverse the trend.

“Retirees are fleeing New Jersey and it’s not because of the weather,” stated GSI’s president Regina M. Egea. “Retirees acknowledge that New Jersey has strong natural attributes such as access to high-quality healthcare, geographic and ethnic diversity and substantial transportation infrastructure in parts of our state.  That unfortunately is often not enough to overcome the high cost of living for those on a fixed retirement income. Our analysis finds that the cost of living, driven by taxes, is separating generations of families, and forcing retirees to leave the communities they’ve called home for generations. This situation is the result of decades of policy decisions that have been made in Trenton but can also be reversed by refocusing our priorities.”

The report demonstrates that New Jersey is losing retirees at a higher rate than peer states, establishes the reasons behind their departure (cost of living/taxes) and lays-out the financial ramifications of losing retirees.

The analysis, which builds on a pre-pandemic GSI/FDU survey that found 33% of state residents approaching retirement were planning  to leave the state due to excessive taxation, offers a comparison to Pennsylvania and Delaware, which are contiguous to New Jersey and represent retirement alternatives for retirees looking to stay near New Jersey; as well as Florida and Arizona, which represent two of the top national destinations for retirees who prioritize a warmer climate.

Importantly, the GSI study also found that any loss of retirees also carries enormous fiscal implications for the future of the state.  Over the last decade, New Jersey lost at least $79 billion to the comparison states, $56 billion of which was to Florida alone.  Considering our state’s fiscal challenges – structural budget deficits, continuously expanding unfunded pension liabilities, growing health care obligations – New Jersey can ill-afford the loss of such a large amount of wealth every year.  The dramatic impact of such wealth on New Jersey’s fiscal outlook was analyzed in detain GSI’s recent report, Toward a Fiscally Sustainable New Jersey: Analysis & Recommendations.

The objective data does indeed back up what these Seniors told us: it is simply measurably more expensive to retire in New Jersey compared to these other states but that doesn’t have to be the end of the story.  There are ideas to address the tax burden borne by Seniors but also ways to increase the competitiveness of our state in other ways for those on fixed incomes.

•          Expand Income Tax exemption to include all retirement income;

•          Address gaps in public transportation for these residents.

“Make no mistake, this is a serious crisis for New Jersey’s families and our state’s future,” stated Ms. Egea. “But these solutions are attainable and can be implemented with commitment from our leadership in Trenton.”

In post-election comments, Assembly Speaker Craig Coughlin noted the results, where Democrats in the legislature suffered their worst losses in three decades, were a reflection that “Taxes is always at the top of everybody’s list in New Jersey” and that his caucus would be looking at that message. As we have documented in this report, time is of the essence.

This report, and other tax issues impacting New Jersey residents was the focus of the latest edition of The GSI Briefing podcast, which features a conversation with nationally known CPA, Dan Geltrude with GSI’s Regina Egea. You can listen to the episode by clicking below.